The world’s scariest hike can be found in China at Mt. Huashan. At its base, you’ll find a gigantic set of stone stairs, called “the Heavenly Stairs.” These stairs go so high up the mountainside, it’s hard to see where they end. If that wasn’t enough, the precarious stairs lead to the world’s most dangerous trail the “Plankwalk in the sky”. The plank trail leads high up the Hua Shan mountain just outside the city Xi’an. No one will force you to wear safety gear, although it’s strongly encouraged. The trail itself is dangerous and stunning, but what is at the top will really shock you.  Do you think this is the world’s scariest hike?  See for yourself below and let us know what you think.

The stairs themselves, although beautiful, are daunting.

And they are the easiest part of the climb. 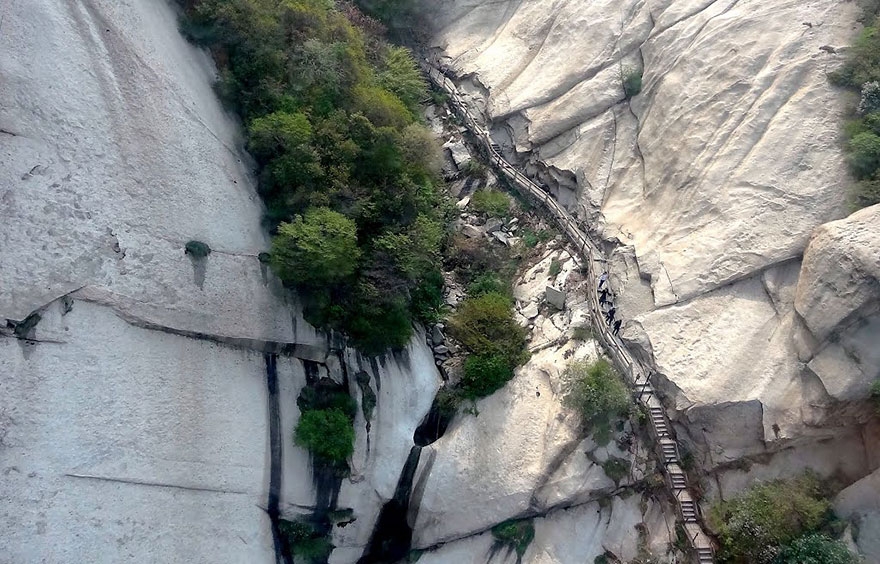 However, countless people make the dangerous journey for what’s at the top… 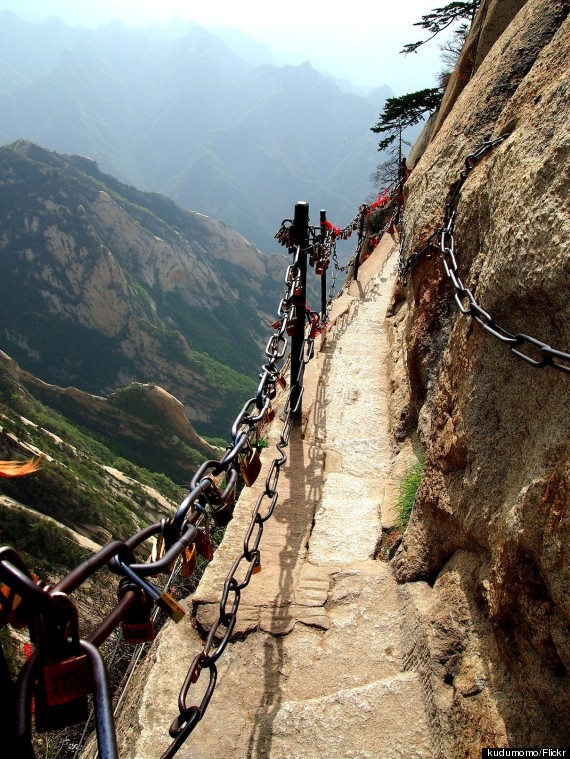 Then, once you get high enough, you can take a gondola to the southern peak, where the plank path awaits.

This is where the path turns truly dangerous, with nothing but planks to walk on and a rail of chains to hold onto.

There’s almost nothing from keeping you from falling. 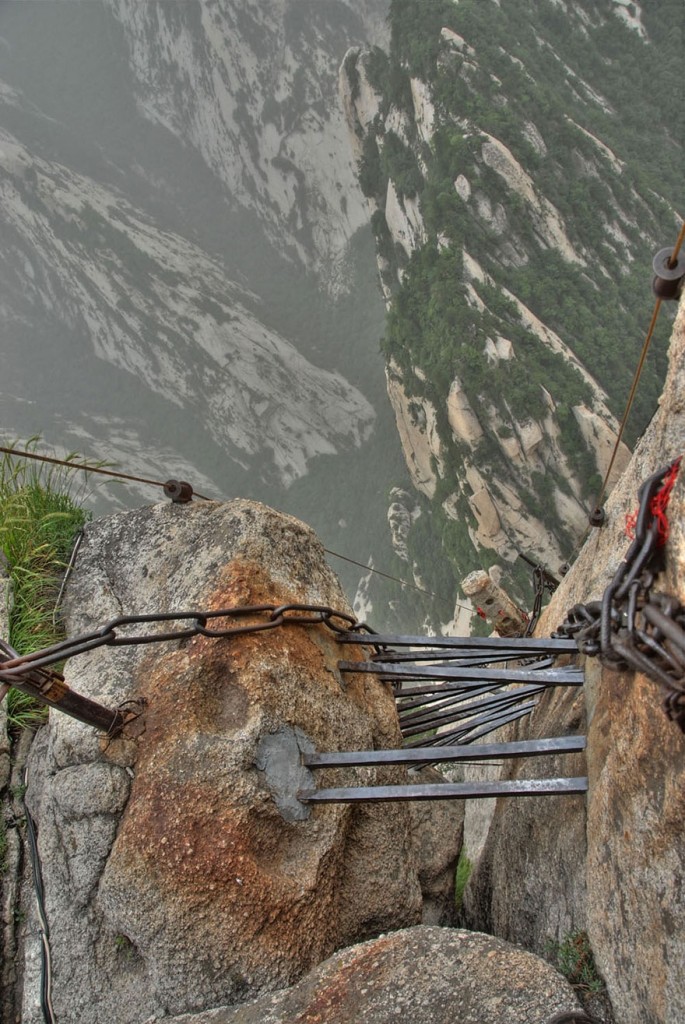 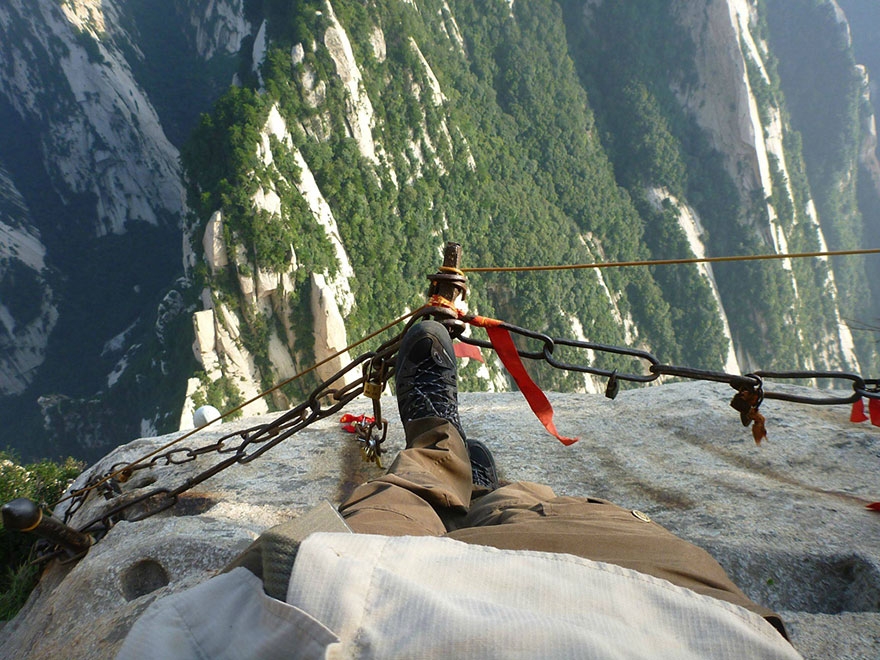 There are parts you must climb as well, with toe holes cut out.

Our palms are sweating just looking at this path.

But, if you’re brave enough to keep climbing…

You’ll find something pretty interesting at the end of your journey.

At the very top of the southern peak is a Taoist temple that was converted into a teahouse.

Thousands of people climb the world’s most dangerous path to end up at a teahouse. 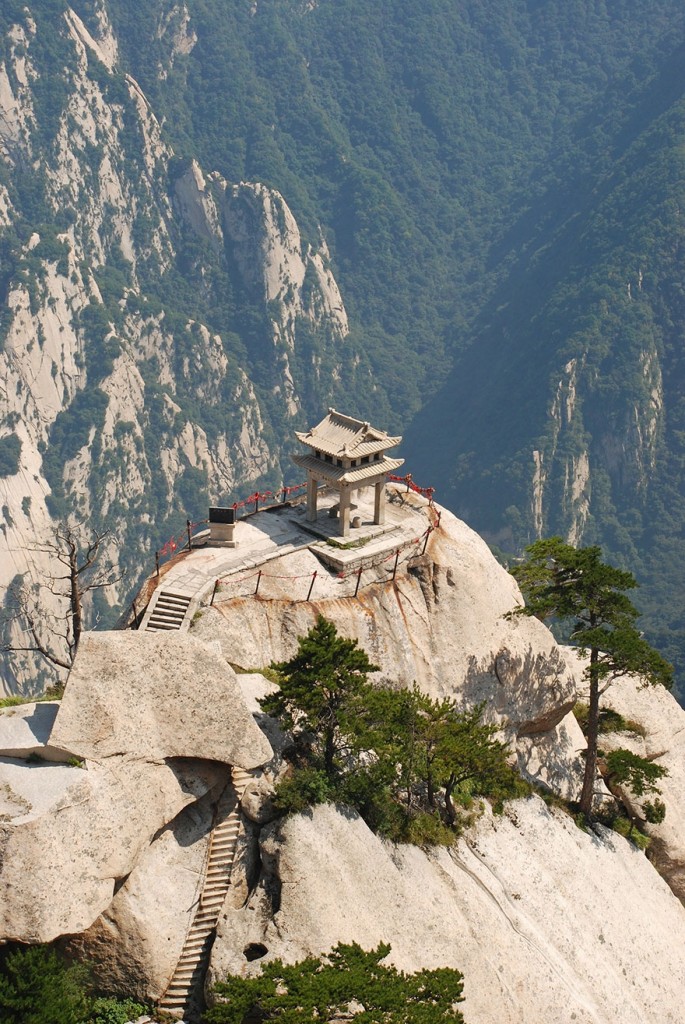 The teahouse is one of the many Taoist temples to be found on each of the five peaks that make up Mt. Huashan. As the original inhabitants practiced asceticism, and didn’t make a habit of traveling, they daily meditation was heavily accented by drinking tea. For this reason, over the years, this temple has turned into a teahouse.

Mt. Huashan is located in Huayin, a city 120km east of Xi’an in the Shaanxi Province of China. For reference, Xi’an is the location were they unearthed the Terracotta Warriors and the cradle of Chinese culture extending some 3000 years into the past. This particular teahouse is on the South Peak, which has an altitude of 7,087 feet.

Doing the Plankwalk in the Sky can set you back up to $63 USD including entrance to the mountain, bus, cable car and harness; but for the adventure seekers it is money well spent.  If you decide to do the entire world’s scariest hike, it can take roughly six hours.  Just make sure you are wearing some good Adidas or Nike shoes.